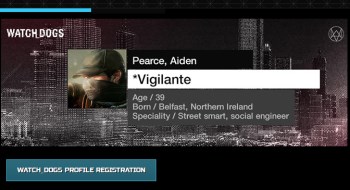 Gamers in the U.S. have a chance to appear as a pedestrian in Ubisoft's Watch Dogs thanks to what may be one of the most ironic contests ever conceived.

Watch Dogs, at its core, is all about privacy: what it means, what it offers and what we're willing to trade it away for. The protagonist, Aiden Pierce, is an "anti-hero" who hacks into the Central Operating System network that unifies near-future Chicago; Lead Story Designer Kevin Shortt explained in a preview that Pierce has good reasons for doing what he does, but the cost and consequences of that fundamental and very widespread violation of privacy promises to be one of the game's central themes.

In that light, Ubisoft's decision to run a "have your privacy violated" Watch Dogs contest on Facebook, the catalyst of privacy controversies around the world, is either brilliantly clever or stunningly thick. Either way, it's a simple thing: Launch the Facebook app, log into your Uplay account (yes, you'll need one of those too) and then fill in the blanks and, optionally, upload a photograph. 15 entrants will be selected at random to appear as NPCs in the game, and 50 others (restricted to those who included a photo with their profile) will be get exclusive Watch Dogs wallpapers and have their information used in promotional materials.

Entrants must be at least 18 years of age and residents of the U.S. (minus Rhode Island for some reason), and of course willing to surrender whatever personal information Ubisoft requests in the name of cheap entertainment and fleeting "fame" - 15 winners for 15 minutes, you might say. I still can't decide if this contest is subversive or just dense, but I'm leaning toward the former. Does that make a difference? Smart or stupid - will you play either way?