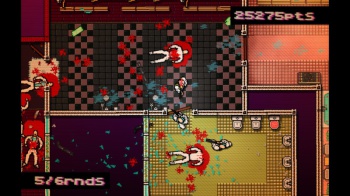 The latest iteration of the Humble Indie Bundle has broken $1 million in sales - an impressive feat for a software package that allows users to determine their own price.

It was only yesterday that we reported on the debut of the eighth Humble Indie Bundle, yet here we are bringing you word that the Bundle has already surpassed over $1 million in sales. As with all Humble Bundle packages, the main draw of Humble Indie Bundle 8 is twofold: First, it collects a number of fantastic independent games, and second, prospective buyers are allowed to determine how much they would like to pay for the Bundle. Feel like forking over $2 for the entire thing? Go for it. Want to be a bit more generous and toss in $100? That's your prerogative. Either way, the Bundle seems to be a pretty successful venture.

Like most people who get paid to write about videogames on the 'net, I generally lean toward pessism, so instead of believing this sales milestone to be an indicator of human generosity, I see this success as the result of the stellar games included in this version of the Humble Indie Bundle. All told, buyers are given seven titles: Proteus, Dear Esther, Awesomenauts, Little Inferno, Capsized, Thomas Was Alone and Hotline Miami. Cursory mathematical averages peg each of these games at $10 each if you were to buy them piecemeal, so grabbing them en masse in this pay what you want fashion is certainly a bargain. Still, it's very impressive to see the Bundle break $1 million in sales in a little more than 24 hours.

At the moment, the Bundle's total sales stand at $1,207,704.88, with 212,763 purchases made so far. That breaks down to a little less than $6 per purchase on average. Assuming you were to pay only that amount, you'll be saving something like 90 percent off the standard retail price for these games. That however is not why we implore you to buy the Bunle. Instead, we urge you to pick up these titles because its proceeds can be earmarked directly for charity. When buying the Bundle you're given the option to determine how much of your cash is donated to initiatives like the Child's Play charity fundraiser and the Electronic Frontier Foundation. In short, you're getting a bunch of awesome games at cut-rate prices while also benefitting humanity at large. It's a win-win for everyone, which is a bit ironic given that the most arguably popular game in the Bundle, Hotline Miami, is a massively brutal quest to annihilate assorted thugs in as violent and sadistic a fashion as possible.

Who said videogames have no redeeming social value?