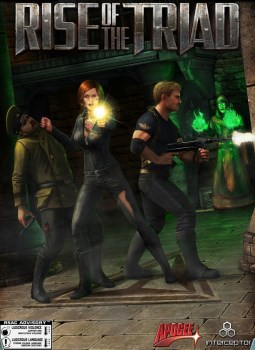 The cover art for Interceptor Entertainment's upcoming Rise of the Triad reboot will probably ring a bell with old-time shooter fans.

"Wait a minute," you say. "Rise of the Triad is being released digitally. Why does it need cover art?" My answer would be quite simply that I have no idea, but I like it: as this comparison image shows, it's a nearly direct clone of the original, right down to the old-school RSAC advisory label. Not practical, perhaps, but very groovy.

Not exactly Crysis levels of hardware needed for this one, which is nice; the quad core CPU might be pushing it for some folks but a GTX 560 is pretty much baseline equipment for any kind of gaming PC these days.

Interceptor also announced that Rise of the Triad will be released DRM-free on GOG and Green Man Gaming as well as on Steam. We still don't have a hard release date, but look for it to arrive sometime this summer.