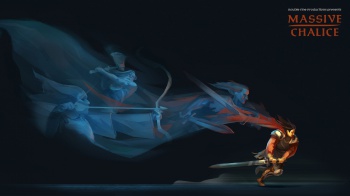 This morning a new fundraising effort appeared on Kickstarter with the express purpose of backing a new strategy game from Double Fine. Dubbed Massive Chalice, the title is described as "a tactical strategy PC game on an epic fantasy timeline from the creators of Psychonauts, Brütal Legend, and Iron Brigade."

The game is structured into two main layers: strategy and tactics. In the strategy layer, you oversee your kingdom, arrange royal marriages, conduct research, and make the far-reaching decisions that will determine the fate of your legacy.

In the tactics layer, you fight brutal turn-based battles to defend your kingdom using small squads of customizable heroes.

Permadeath is inevitable: your heroes will grow, age, and eventually die. You'll have to choose between keeping your favorite heroes on the battlefield or retiring them from combat to foster a new generation of warriors.

Despite only having launched a few hours ago, the Kickstarter is already pulling in huge piles of cash. Double Fine hopes to raise $725,000 by June 27, and the effort is well on its way, having already attracted $73,895 at the time of this article's publication.

It should come as little surprise to see Double Fine once again turn to Kickstarter to generate cash for its latest project. You may recall that the firm used a similar strategy to fund Double Fine Adventure, a game that broke Kickstarter records by raising $3.3 million on the crowdfunding site (and arguably kicked off the current popularity of Kickstarter among game developers).

If you're interested in tossing some money at Double Fine or simply want to see the few pieces of extant concept art created for Massive Chalice so far, you should pay a visit to the game's Kickstarter page. Otherwise, expect this project to earn its cash and then some in pretty short order. Actually, the question now isn't whether or not Massive Chalice will be able to attract $725,000, but instead how much money beyond that goal the game will inevitably pull in.