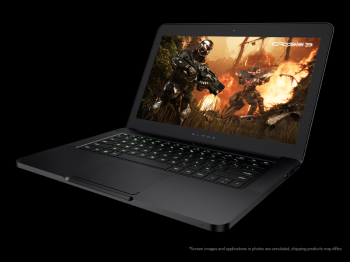 Razer are touting the new version of its Blade gaming notebooks as "the world's thinnest gaming laptop," and will set you back $1799.

Several years ago, Razer announced the Razer Blade, an almost $3000 USD gaming laptop with incredibly beefy internals and the new Razer switchblade interface (basically a fancy little touch-screen LCD and programmable keyboard). While quite a cool concept, the incredibly steep price was a bit too rich for a lot of people's blood. Razer has now announced a 14" version of its Blade notebook, coming in at an ultra-thin 1.7cm (closed), and costing a slightly more reasonable $1799.

The 14" blade packs a GeForce GTX 765M GPU and a 2.2GHz Intel i7 quad-core CPU (Turbo Boost up to 3.2GHz). It also features 8GB of onboard DDR3 memory and a 256GB SSD. That's quite a lot for such a small package, and should get you a decent amount of gaming mileage. The notebook has a 1600×900 HD screen, and should get you around six hours of battery life. It of course still comes with the programmable switchblade interface, though seems to be lacking the fancy LCD touch screen.

The laptop runs on Windows 8 and has several USB 3.0 ports. Curiously, it is lacking a touchscreen, which seems standard for notebooks in its class (especially those on Windows 8), but this was probably a conscious decision to keep costs down.

Razer has assembled the new Blade with bespoke parts and a custom engineered thermal system to prevent the notebook from melting during demanding titles. This is a reassuring point to someone who recently lost a gaming laptop due to poor ventilation...