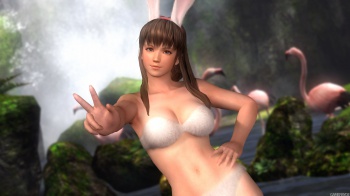 Tecmo has announced it'll be releasing an alternative, free-to-play version of Dead or Alive 5 Ultimate in addition to the full retail game.

Dubbed Core Fighters after the four playable characters it includes, the free-to-play version is currently set for a digital release on PS3 on September 3rd in the US. Tecmo Koei is currently in talks with Microsoft about a 360 version.

So only four playable characters means you can probably escape the hordes of button-mashing gremlins who automatically gravitate to Ryu Hayabusa, right? Wrong. Ryu is part of the Core Fighters line up, along with mainstays, Hayate, Kasumi and Ayane. In fact, since owners of the free version can play against those with the full retail release, you're probably going to be seeing a lot more of Ryu and his horrifying teleport pile driver. Core Fighters includes all the stages from the full release, along with the tutorial and training modes. You'll have to pony up a smooth $15 for the game's story mode, and extra characters will run you $4 each. The original Dead or Alive 5 included a grand total of 19 characters, and Dead or Alive Ultimate promises to add at least four more. I'll let you do the math.

With that pricing scheme, Core Fighters seems less like a legitimate F2P release and more like a generous demo. The point of micropayments is that they're, you know, micro. Micro means small, in case we're not clear on this. Four dollars per character is not small. On the bright side, it does let me end this piece by pointing out that the game's notorious lady bumps aren't the only things that are unnaturally inflated.