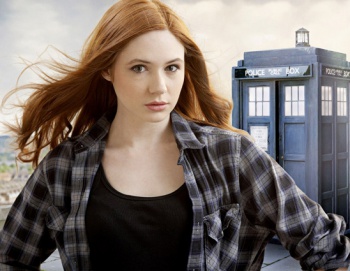 Those of you who are fans of Doctor Who will recognize Karen Gillan as the spunky young redhead who played Amelia Pond opposite Matt Smith's Doctor from 2008 through 2012. Those of you with functioning eyes will recognize her as very, very lovely. Whichever reason you need fall back on, you should probably be excited to hear that she's joined the cast of the upcoming Guardians of the Galaxy film adaptation.

Specific details on what Gillan will be doing in the film remain a mystery, but The Hollywood Reporter, in breaking news of her casting, posited the claim that Gillan will be portraying the film's lead female villain - a stark departure for those of us more accustomed to seeing Gillan as a heroic figure battling Daleks or whatever.

Gillan joins a cast that is already quite impressive. Among her co-stars in Guardians are Chris Pratt, Michael Rooker, Lee Pace, Zoe Saldana, former pro wrestler Dave Bautista and revered actress Glenn Close. Casting is currently ongoing, so expect the film to pick up even more familiar names in the near future.

Guardians of the Galaxy is currently slated to start shooting in June, with Marvel Studios hoping to debut the film on August 1, 2014.