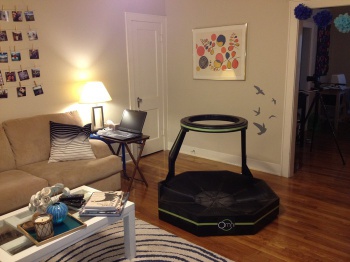 The gaming treadmill designed alongside the Oculus Rift headset is currently raising $1000 a minute on Kickstarter.

If you're interested in virtual reality tech like the Oculus Rift, odds are you're keeping a close eye on Virtuix's Omni-Directional Treadmill. In development for the past two years, the Omni is designed to translate real-life movements into in-game actions, so players can literally hike through Skyrim's vast landscape or run for cover in a first-person shooter. Today, Virtuix launched a new Kickstarter project to fund the Omni into its manufacturing stage, and more importantly, to put discounted units under the feet of fans. Apparently people really want their virtual reality machines; the Omni not only exceeded its $150,000 goal within hours, but the donation amount is rising at a rate of $1000 a minute.

"The Omni is the result of two years of researching, experimenting, prototyping and designing," says Virtuix founder Jan Goetgeluk. "We've done a lot of work, and now we're turning to the community to get the Omni through the manufacturing phase. With the help of the community we can start tooling, and get as many Omnis as possible in the hands of VR gaming enthusiasts. Our Kickstarter rewards also come with a significant discount on the Omni's future retail price."

Virtuix's Kickstater is offering various treadmill packages among its reward tiers, but most are highly limited. Every Omni treadmill below $400 has already sold out, save for a $300 "do it yourself" edition that lets hardcore enthusiasts design their unit's upper support structure. There's a pretty good chance that even those copies will have vanished by the time you're done reading this sentence, so if you really want an Omni without paying full price, you should probably get to Virtuix's Kickstarter page right away.