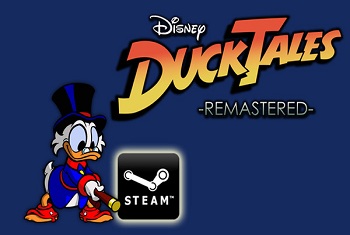 PC versions of Capcom's remake will launching this summer.

DuckTales is one the classic examples of a great licensed game. That in mind it's no surprise that when Capcom announced it would be publishing a modern day remake with hand drawn visuals and remastered music, it inspired excitement in fans of retro gaming. Now PC gamers can share in the jubilation because Capcom has announced that it will be releasing versions for Steam, Origin and other digital download services.

"You guys demanded it, so we're unbelievably happy to announce that your most requested platform will indeed be receiving DuckTales: Remastered," said Capcom. "Capcom's heartwarming collaboration with Disney and WayForward will definitely be pogoing onto hard drives everywhere via Steam, Origin, Impulse, GamersGate, Green Man Gaming and numerous other places PC gamers download their wares." Similar to the versions to the Wii U, PSN and XBLA versions, the PC edition will sell for $14.99. It will also be launching this summer, within a window similar to the console versions.

While the mere existence of DuckTales: Remastered is a serious boon for retro gamers, it's just one of several collaborations between Capcom and Disney that old school gamers would probably love to see given similar treatment. DuckTales 2 would be something of an obvious choice, but personally, I'd love to see some love extended to Chip 'N Dale: Rescue Rangers. DuckTales may be good, but it doesn't let you toss Player Two down a pit to an untimely doom, now does it?