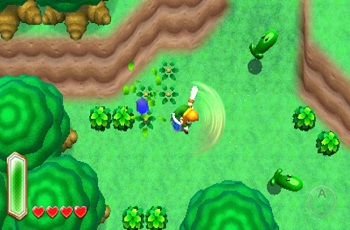 The Legend of Zelda: A Link to the Past 2 will feature Light and Dark worlds and run at 60FPS while in 3D.

Among the ranks of the Zelda series you'll find few titles as well loved as A Link to the Past. Nintendo's announcement, in turn, that it had a direct sequel to the classic in the works was both a surprising and welcome development for fans of the original. Now, Nintendo has revealed new details concerning A Link the Past 2's story, gameplay and technical aspects that should excite already eager gamers.

"This new title will feature lots of things that are new to the series; right at the start of the game, there's a big surprise that will shock players," said series producer, Eiji Aonuma. "Rather than forcing elements of the original story into this one, we've instead focused on bringing back the characters, so you can see what happened to them after the events of the first game." The game will also be revisiting the two world mechanic of the original, forcing players to switch between Light and Dark planes of existence to complete the game. "Link's [new] ability to become a painting will be related to the that," said Aonuma.

On a technical level, A Link to the Past 2 will also be pushing the 3DS' forward. The game is being designed to run at 60FPS, even with the 3D turned on. "All the 3D games up till now have run at 30FPS," said Aonuma. While he confirmed that 3D would still be very much optional and not required to complete any of the game's puzzles, Aonuma stressed that a 60FPS running speed would add up to a much smoother 3D experience.

Related to:
stew shearer, 3ds, a link to the past 2, eiji aonuma, nintendo, the legend of zelda
0
Tweet