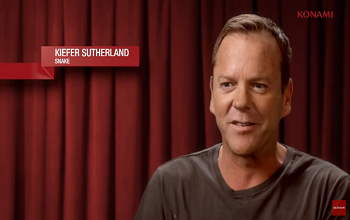 While fans of Metal Gear Solid were excited by the announcement of Metal Gear Solid: Ground Zeroes and Metal Gear Solid V: The Phantom Pain, there were more than a few who were disappointed to learn that David Hayter, the long-time voice of Big Boss and Solid Snake, wouldn't be returning for the new games. The obvious question in the wake of that announcement was who would replace him as the actor behind those characters. Today, Konami finally gave fans an answer. Keifer Sutherland of 24 fame, will be taking over as the new voice of Snake.

The reveal came via Konami's Pre-E3 Stream event and detailed some of the reasons Konami and series-creator Hideo Kojima opted to switch voice actors. "I wanted Snake to have a more subdued performance," said Kojima. "The game takes place in 1984, when Snake is forty-nine years old. We needed someone who could genuinely convey both the facial and vocal qualities of a man in his late forties." Sutherland who did both vocals and motion capture for the game, seems enthusiastic about the project. "It's an honor to be able to play this character," said Sutherland. "There's a real personal quality to the character that I've connected to."

Sutherland, who is forty-seven and fairly versed in playing a secret agent, definitely fits Kojima's bill in several ways. That said, Hayter's performance as Snake is iconic. Even watching game footage with Sutherland talking in the background, it's hard to imagine anyone else in the role. None of this is to suggest that Sutherland's performance will be poor, but it's a change that will take some getting used to.