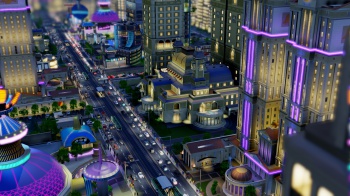 Update 5 for SimCity PC will be ready in a few weeks, with Update 6 already in the works.

Apple fans willing to overlook SimCity's online-only launch nightmare have been waiting patiently for the June release of the game's Mac version. Well, it appears we have even longer to wait, as EA has just delayed the Mac version (again), this time until August. SimCity Mac was originally supposed to launch in February 2013 alongside the PC version; it eventually launched in March on the PC, with the Mac version pushed to June.

In a blog post, Senior Producer Kip Katsarelis called the move a "tough decision," but said it had to be done "because we do not believe it is ready for primetime yet. We want to ensure the Mac is a great experience for our players and that is why we are taking more time." To thank non-PC gamers for waiting until August, EA will make the SimCity Launch Park, provided to early PC adopters in Update 4 last month, available to those who pick up the Mac version. This adds a new region, Edgewater Bay, which has seven cities surrounding a Great Work site.

Meanwhile, PC owners who have stuck with SimCity will be treated to Update 5 "in a couple of weeks," with the patch bringing a slew of fixes and improvements. The update is "focused on improvements to Multiplayer and Multi-city Play," such as adding a filter for friends' regions, more trading control, and regional commuting. A full list of fixes can be found here. Update 6 is already in the works as well, with some of the planned improvements coming from user feedback in the SimCity forums.

It's a shame that Mac owners have had to wait so long for SimCity, and after seeing what happened at the PC launch, it's hard not to be wary. The last thing EA and Maxis need is another less-than-stellar launch, those, so hopefully the delay to August will give Mac fans the SimCity experience they've been waiting for without quite so many hiccups.