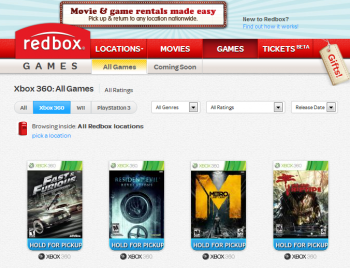 Redbox has launched "gamingfuture.net", a place for its customers to discuss what excites or concerns them about next-gen gaming.

When Microsoft tried to appease angry fans by spilling more beans than a clumsy Mexican chef regarding its Xbox One DRM and used game policies, it included the line: "Loaning or renting games won't be available at launch, but we are exploring the possibilities with our partners." Redbox, who we can safely assume to be a Microsoft partner considering the presence of an official Xbox 360 Redbox app, has recently opened the floor for its customers to express their own concerns about next-generation gaming and the future of game rentals.

The popular game rental service has launched "gamingfuture.net", where its customers can air their grievances, or share their excitement over next-generation consoles. Considering Redbox's business is in game rentals, we can safely assume this to be a sort of brainstorming project into how exactly they can incorporate Xbox One and PS4's sketchy new take on "game licencing" into its business.

The website features various links to reports on the Xbox One and PS4, including the aforementioned bean-spilling press release. The company has apparently also messaged and alert to members of its "Text Club" service about the site, as well as posting about it on the official Redbox twitter account.

Redbox currently offers a $2 per night videogame rental guarantee, something that it no doubt hopes to continue into the next generation. With Microsoft's insistence of "always-online" and cloud gaming, could we see game rentals become digital only? Considering the Xbox One has to "phone home" every 24 hours, renting a game, downloading it, and playing it for $2 a night all without leaving your living room seems to be something that is entirely plausible.