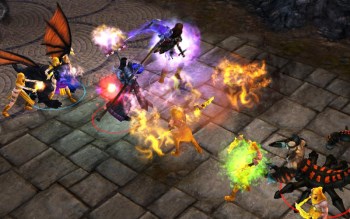 The Battle for Graxia MOBA will go offline at the end of June but Petroglyph Games says it hopes to bring it back again someday.

Launched in September 2011, Rise of Immortals didn't exactly set the world on fire, leading indie developer Petroglyph Games to overhaul the whole thing and re-launch it as Battle for Graxia on May 1 of this year. But that didn't do anything to change the game's fortunes, and Petroglyph has announced that it will be going offline for good on June 27.

"We have decided to take BFG offline effective June 27, 2013. Effective immediately, we will no longer accept payment for the purchase of Petroglyph coins," the studio wrote in an announcement that was actually posted on May 30. "At midnight (PST) of June 27, 2013, the BFG servers will be closed down and there will no longer be any access to the game. We reserve the right to bring BFG back online at some time and hope to do so in the future."

"Once again, we greatly appreciate everyone's efforts in helping to make this game possible," it says. "Please join us until June 27, 2013 in celebration of all the great memories and fun events that made BFG such a great game to be a part of."

Despite the optimistic tone of the "we reserve the right to bring BFG back online" message, the studio acknowledged in a later message that such an outcome is unlikely. "We had two years starting with Rise of Immortals [to make Battle for Graxia a success]," it wrote. "The game has had quite a bit of time to try and make it, and we're just at a point where the studio needs to focus on new upcoming projects."