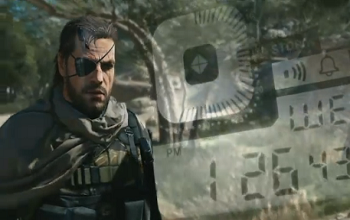 Microsoft's E3 conference opened up with a bang today, showing off a new trailer for Metal Gear Solid 5: The Phantom Pain, which will be releasing on Xbox One. The trailer itself showed off elements of the story which initially followed Big Boss, labeled "Punished Snake" by the trailer, rescuing his friend Kazuhira "Master" Miller in Afghanistan. It then seemed to move to an African setting where it introduced a slew of characters new and old. Included among them was a female sniper named Quiet, a "Technocrat" by the name of Emmerich, and, not unexpectedly, series mainstay Ocelot, among others. It also introduced the somewhat ominous "Those Who Don't Exist," who we're assuming will be enemies you have to contend with over the course of the game.

The trailer wasn't shy on mechanical details either. The Phantom Pain will be open world, a feature that should allow for a variety of sneaking possibilities the trailer was happy to show off. Players will be able to ride horses that can then be used as concealment and commandeer enemy vehicles to move through areas. The game will also feature a realistic passage of time, including a day and night cycle that will assumedly affect your ability to stealth through areas. The Phantom Pain will also see the return of the series' CQC combat system, which Snake used in the trailer to steal an enemy's weapon. All of this added up to what the trailer promised would be complete strategic freedom to proceed through the game as the player chooses, whether it be all sneaky-like or blasting your way through anyone hapless enough to get in your path.