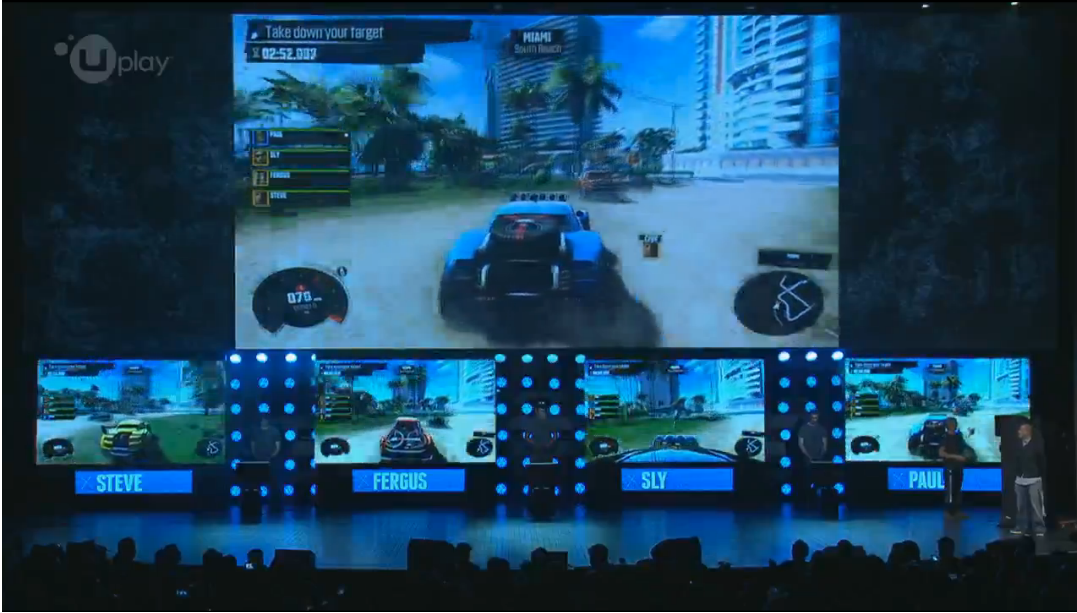 The next-gen racing game from Ivory Tower and Reflection takes place in a "persistent online world" the encompasses the entirety of the U.S.A.

Picture World of Warcraft meets Need for Speed. That's the kind of game you are looking at with Ivory Tower and Reflection's The Crew. The Crew is about building cars and driving across America. Across the entirety of America, Ubisoft announced at it's E3 press conference. It takes place within a "persistent online world" (industry speak for "MMO") where every other driver you encounter may be an AI, but also may be another human player. Oh, and there are boss fights. In a racing game.

"[The Crew's world has] more variety in a videogame world that is as big as has ever been created," boasts Ubisoft, telling us that players will "Seek to infiltrate and take over a criminal organization one city at a time." With a little help form your friends, of course. A live demo of the game at E3 showed four players in different parts of America all teaming up to take down a gang kingpin by ramming his car until it crashed. In other words - a boss fight.

Ubisoft explains that there is no lobby system for The Crew, as all interactions take place entirely in-game. Players can chat with their friends, form groups, join Crews, and tackle group missions all from an in-game interface.

Another key feature of The Crew is the insane level of vehicle customization. Ubisoft promises that you can strip down a car to the engine, and change individual engine performance parts. The demo showed all kinds of cars, from off-road monsters to street-bound speedsters, all with varying levels of customization.

Being an MMO, the game will of course have a competitive component to it. The demo stopped short of actually showing that, ending with two rival crews facing each other off, so we're not sure if it will encompass races, destruction derby's, or both.