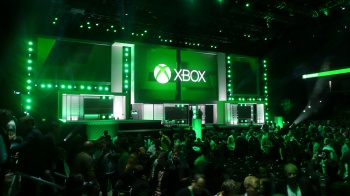 Greg Tito provides commentary on what it was like to be in the room for Microsoft's press conference, and what it all means.

At points, you could convince yourself that the event employees in pretty green dresses outnumbered the attendees. There were thousands of cameras and phones clicking, rolling, Tweeting. I saw a guy wearing a GoPro camera on his head to apparently record everything he looked at. He appeared Italian, but perhaps that's just because I'd been inundated with foreign language speaking folks since I got to the Galen Center. The excitement in the air was sliceable with a Kinect hand chop. Hip Hop Gamer was there.

The official name of this thing is the Xbox E3 2013 Media Briefing. Will it be brief? Will we media be impressed with the promise of a new experience? Or will the gathered cynics be justified in their skepticism of Microsoft's used games policies, always-connected necessities, and Skype calling on the Xbox One.

I am split. I don't actually use my Xbox 360 for anything other than a media machine. My wife and child use Netflix, Hulu and HBO Go to consume our content through the console almost exclusively. I use the same television for live TV through a broadcast antenna, and the promise of quickly switching between these services actually appeals to me more than the games.

But the question remains: Why do I need to invest hundreds of dollars into a new machine when I have one that already does it? Consumers who don't have an Xbox 360 now might already have smart TVs which do most of what Microsoft proposes. Is the single selling point of the Xbox One that you can talk to it?

The next version of Kinect may well be worth it, at least for me. I personally don't enjoy most of the motion gaming I've done, except as a novelty. If the Xbox One truly provides the promise we were shown at the Galen Center three years ago, then perhaps Microsoft has something you'd feel good about dropping hundreds of dollars on.

Kinect voice commands and TV-watching might be what I'm personally interested in, but games are what we really want from a game console, and Microsoft said it would be showing an ungodly number of them today. I sincerely hope there are titles that appeal to not only to the mainstream like shooters and sports games, but weird strategy titles or games which defy genre classification.

We shall see. Steve Ballmer is lubed up. The Call of Duty dog is shampooed. The indie music is waning. The press conference is about to begin.

Holy crap, that was a load of games. Microsoft mentioned the video stuff it focused on in its announcement three weeks ago only in passing, and brought out studio head after game designer after community manager to tout an impressive array of games. Of course, they all had to do with killing people in some fashion, but we'll get to that later.