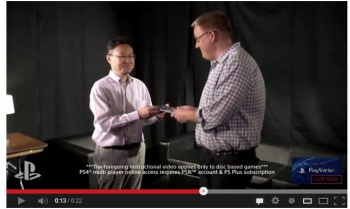 Similar to how Xbox Live Gold currently works, users will require a PlayStation Plus subscription (around $5 a month) to play PS4 games online.

Nestled among all the kicking-ass and taking-names of Sony's E3 press conference was a tiny little of bad news that was shown and brushed aside so quickly, you would be forgiven for missing it entirely. It appears that Sony will be following competitor Microsoft and forcing a PlayStation Plus subscription on gamers who want to play PS4 games online. PlayStation Plus currently costs around $5 a month, which is roughly the same as an Xbox Live Gold subscription.

The little nugget of disappointment was literally buried in the fine-print of the hilarious used game instructional video. If you squint at 0:12 in, you'll see the following statement:

It's worth noting that you will not require PlayStation Plus to watch Netflix, and it will continue to offer the current PlayStation Plus benefits such as free games. If you're already a PlayStation Plus subscriber, your membership will carry over from the PS3 and PSVita to the PS4.

It is a little harsh to be calling this "bad news", considering that Sony's main rival Microsoft has been doing this for years, but it is the one little scratch that tarnishes Sony's otherwise flawless press conference. Also, the benefits of PlayStation Plus are nothing to scoff at. Sony isn't offering the bottom of the bargain bin for its free game catalog, but new releases and best sellers like XCOM and Uncharted 3.