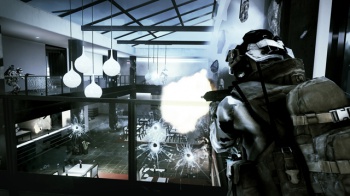 To celebrate the fact that 1 billion collective hours of Battlefield 3 have been played, DICE is giving away the Close Quarters DLC for free on all platforms.

People have played Battlefield 3 for quite a long time. "How long?" you ask? Over 1 billion collective hours, claims DICE. To celebrate milestone, DICE is running several promotions during E3 week. First, Battlefield Premium will be 50% off on the Origin store. Second, the Close Quarters DLC, previously released for $15 (or as part of Battlefield Premium), will be completely free to gamers on all three platforms. These offers will only run during E3 week, so make sure you claim them fast.

To claim your free Close Quarters DLC, simply go to your platforms in-game store (for consoles) or Origin client (for PC). In your Origin app, enter the "Redeem Code" menu and enter this code: BF3E3. That's it! Close Quarters will now be tied to your account, and will stay there forever. The Close Quarters DLC, as the name implies, takes combat indoors, offering a variety of close-combat weapons and indoor maps.

But what about you tiresome, dedicated gamers who supported DICE at every turn and bought Battlefield Premium when Close Quarters came out? What about you day 1 subscribers? Don't worry, DICE is prepared to reward you handsomely... with an exclusive dog tag! Oh, and you'll also be invited to play in the Battlefield 4 beta so I guess there's that too.

Premium members will also enjoy double XP in all ranked servers during the duration of E3.

This is EA doing something right for once. Giving away stuff for free not only makes people happy, but it makes people who would have otherwise quit playing altogether actually boot up the game, which may spur them on to purchase one of its other three DLC packs.