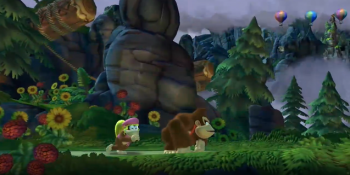 The Wii U Donkey Kong Country game brings DK and his pals into glorious HD.

Nintendo is riding the recent Donkey Kong resurgence into the Wii U, announcing Donkey Kong Country: Tropical Freeze for the system due out later this year. The new game brings DK into glorious HD, as Iwate states, you can see the individual hairs on his furry monkey back. The game will feature five worlds, co-operative multiplayer, and the return of Dixie Kong, Diddy's love interest from Donkey Kong Country 2.

The 2 player simultaneous mode works pretty much exactly the same as it does in Donkey Kong Country: Returns for both the 3DS and Wii, but player 2 will be able to choose between Diddy and Dixie. The new game will feature five new worlds, which seems a bit short considering the eight (or nine) worlds the Wii/3DS version had.

When playing as Dixie, you'll be able to use her unique helicopter spin ability that she used in Donkey Kong Country 2.

Iwata boasts that the new game will uses different camera angles - not just the side view that we are used to in Donkey Kong games. A segment of the video shows a front view being used for some of the game's famous "barrel blast" segments.

In Donkey Kong Country: Tropical Freeze, Vikings have overrun Donkey's home, giving the whole game an icy vibe. They probably stole his bananas as well because that's what happens in every single Donkey Kong game.

The game will be available "later this year", both in stores and as a Nintendo eShop download.