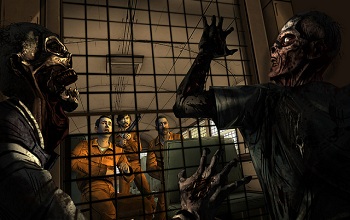 400 Days will release in July with a Vita version following in August.

Telltale's The Walking Dead did an arguably good job of balancing its choice mechanic with its desire to tell a clear and focused story. There were set plot points, but it also gave you enough wiggle room to make you feel like you were shaping your own character and version of events. The choices you made from episode to episode could change the way other characters treated you and, according to Telltale, will continue having influence in the recently announced episode 400 Days.

This said, gamers who have yet to play The Walking Dead's first season won't be left in the lurch. Telltale has confirmed the new episode will be enjoyable whether or not you've already played existing content. Players won't want to take their actions lightly, however. Much like the choices across the length of season one, decisions made in 400 Days can affect the eventual season two. "Who knows, some of the characters that you meet might end up in season two," said Richard Iggo, with Telltale's marketing. 400 Days will debut in July on PSN, XBLA, iOS, PC and Mac for $5. A Vita version will follow in August.

It will be interesting to see how season one choices play out in 400 Days. Whereas the The Walking Dead's first season told a tight ongoing plot, 400 Days will focus in on five unconnected characters and their separate encounters with a truck stop. It's easy to fathom how the actions of those five characters could affect one another, but not such a simple task to figure out how your moves in season one could change the fortunes of the Walking Dead's newest inductees. The truck stop in question will at least be located close to the events of the first season, but that still leaves a lot open to speculation.