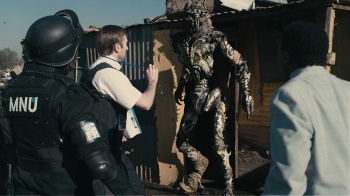 Neill Blomkamp would like to return to the gritty world of prawns and apartheid metaphors, but it's probably going to be a while before we see District 10 in theaters.

Before he became a household name among gamers for his tentative, momentary involvement with that eternally-in-production live-action Halo film, director Neill Blomkamp helmed a movie called District 9 that was simultaneously a clever take on dirty sci-fi and a dark allegory detailing how apartheid tore South Africa apart for so many years. In an interview with IGN, Blomkamp reveals his desire to create a sequel to that film, then explains why it's not going to happen any time soon.

"I really want to make a District 9 sequel," Blomkamp states. "I genuinely do. The problem is I have a bunch of ideas and stuff that I want to make."

"I'm relatively new to this - I'm about to make my third film, and now the pattern that I'm starting to realise is very true is that you lock yourself into a film beyond the film you're currently working on."

Okay, so ... "eventually" then? Reporting on the thoughts of Hollywood types is always so rewarding.

Continuing the interview, IGN then asked Blomkamp if he'd be interested in directing a Star Wars film, since Disney is suddenly in the business of churning those things out on the regular. Blomkamp, in a surprising burst of humility, states that he doesn't want to work on Star Wars as he's "just not the right guy," and more crucially "taking ideas that already exist in Hollywood is just not for [him]."

A director who prefers to tell novel stories? That's a very pleasant thing to say, but again, Blomkamp was attached to that Halo film, so just to be safe let's assume his desire to create new fiction only goes so far when large corporations are tossing comically huge bags of cash his way.