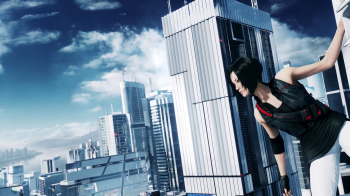 The first-person parkour game is putting the "free" in free-running.

It seems like you can't develop a Flash game these days without it getting converted into a grand open-world free roaming experience, and EA is nothing if not willing to hop on that bandwagon. EA Labels president Frank Gibeau described the upcoming Mirror's Edge 2 as an "open-world action adventure game" in the company's E3 2013 analyst call. The game will also reboot the franchise (which is currently comprised of two entries: the original Mirror's Edge and its side-scrolling iOS spinoff of the same name).

It's been revealed that the upcoming Mirror's Edge (no more 2) will be a reboot/prequel, exploring the origins of the first game's tattooed protagonist, Faith. "Reboot" may be something of a misnomer, since there's hardly any lore to reboot in the first place, but the new name seems to say otherwise. In any event, you'll be back on the rooftops of the original dystopian city, and if the "open-world" label is to be believed, you'll be able to employ parkour to your heart's content to get around. The first game was pretty linear, with only a handful of alternative routes for those skilled enough to find them, so this represents a pretty major shift in design.

Ignoring the unavoidable confusion that comes with giving every game in the franchise the same name, the change to open-world could be problematic for Mirror's Edge. Linear levels are usually a bad thing, but the original game's free-running system did a great job of letting you take advantage of the environment to forge an interesting path from Point A to Point B. The addition of open world elements could radically improve our appreciation for the game's iconic city, or it could be a fatal disruption to the tightly-designed flow of the first game.

Mirror's Edge is in development for PC, PS4, and Xbox One.