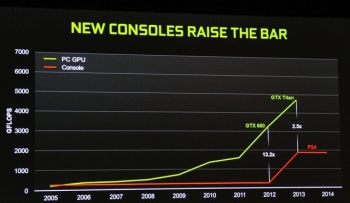 E3 usually focuses on the "big 3" consoles first and foremost, but what do Sony and Microsoft's new machines mean for PC gamers?

Nvidia's senior vice president Tony Tamasi thinks that the new generation of consoles should be taken as nothing but good news for PC gamers. "I'm glad the new consoles are here," he says, "if for no other reason than to raise the bar." Tamasi means that now developers are no longer trying to squeeze good-looking games out of the aging PS3 and Xbox 360 hardware, and will start to work on games that can make the most of a gaming PC's raw power advantage.

"It's nothing but goodness for the PC," Tamasi explains, "The PC will keep growing, but the consoles will give us that next bump." He tells us that "Developers can now build really awesome content that can then scale to the PC," and that "To [Nvidia], the consoles are great because they catch up from a features perspective."

Tamasi refers to the handy little chart you will see above, which shows that while PC graphics card technology has evolved substantially over the years, it has remained, understandably, quite flat for our console brethren. The PS4 and Xbox One, while still not coming close to the monstrously powerful $1,000 GTX Titan, have definitely lessened the gap somewhat. For example, the Titan is only 2.5x more powerful than next-gen hardware, compared to the 13.2x more powerful the GTX 680 was versus the PS3 and 360 last year.

While Nvidia powered the PS3, it lost out to rival graphics chip developer AMD, which provides the GPUs behind all three next-gen consoles. Tasami said that this was a deliberate decision though, as he claimed that Nvidia was unimpressed with the closed nature of consoles, and wanted to instead focus on PC graphics cards.