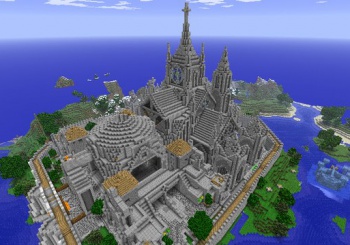 Unspecified updates mean no transferability; hope you built everything you wanted.

"We're actually updating it in pretty significant ways for the new platform," says Microsoft's Phil Spencer about Xbox One's Minecraft. "Bigger worlds, which don't translate between the Xbox 360 and the Xbox One." Which is why you won't be able to port your Minecraft saves over to the new console, when it launches. 4J Studios, the folks behind the Xbox version of Minecraft, previously Tweeted that it was in discussions with Microsoft to allow save porting; presumably those talks didn't bear fruit.

"Obviously this is Mojang's game, and I've had good discussions with Notch about where he sees this franchise going," Spencer went on to say, "trying to create a more connected Minecraft world where your creations can go with you from device to device, but I haven't talked to them about where they are on that path." Hopefully the lack of save transfers is something that only affects Minecraft, and isn't a feature - if that's the right word - of the Xbone. There aren't that many games where past saves become crucial to the player's enjoyment, but the ones that do tend to breed very loyal fans.

We don't know what the new features are which cause this save problem; expanded multiplayer and "feature enhancements" are about all Microsoft's prepared to say, for now.

Update: Phil Spencer has since Tweeted that Microsoft is still in talks to make Xbox 360 saves compatible. Whether or not this will actually happen is still an open question.