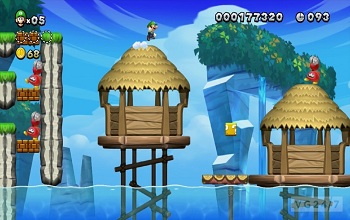 Poor Luigi. Since the very first Super Mario Bros. game he's been trapped playing second fiddle to his franchise label of a sibling. It's the sort of lot in life that leads to inferiority complexes and support groups. That said, Nintendo decided earlier this year to finally pay a bit of respect to Luigi, dedicating a whole year to him and announcing several new, Luigi-centric game releases. One title that tickled the fancy of many a Luigi fan was New Super Luigi U, a DLC pack that would give players the chance to play as Luigi through a version of New Super Mario Brothers U altered to better fit his abilities. Now, Nintendo has revealed more details on exactly what players can expect from the Luigi version of the game.

According to Nintendo, the alternate courses made available by New Super Luigi U will be shorter in length but also more challenging than the ones from the original game. Nintendo hopes that the changes offered by the DLC will be large to help alter people's perception of downloadable content. "Most people think of downloadable content as just an add-on to a game- in Japanese you say 'add-on content,'" said Takashi Tezuka, general manager of EAD Software Development for Nintendo. "But New Super Luigi U is such a large-scale thing - it's like a completely different game."

Whether or not the changes will change perceptions, the increased challenge will certainly be a welcome treat for hardcore platforming fans. The shorter level length strikes me as a particularly smart move. One of the most frustrating things for me in a platformer is when I overcome a tough obstacle just to be killed fighting my way through the rest of a lengthy level. By shortening the stages a bit Nintendo could stand to hit that sweet spot where the experience is challenging but not frustrating.