The action-horror francise will take a breather as the developers pursue other ideas. 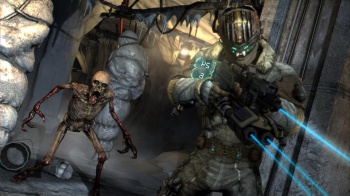 Back in March, a rumor floated around that the Dead Space franchise, along with its developer, Visceral Games, had died, killed by low sales. Both EA and Visceral themselves responded to the twitter-based report, calling it "patently false." That said, there's no Dead Space 4 in the works at the moment, as Visceral Games pursues other projects, EA boss Patrick Söderlund told Eurogamer in an interview.

While Dead Space 4 isn't about to make an E3 appearance this year, Söderlund says that's no reason for fans to mourn: "Will there be another Dead Space game? Who knows? Have we killed it? No, of course not."