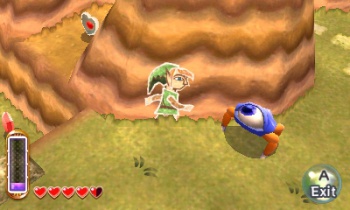 Nintendo's Zelda franchise boss Eiji Aonuma says the upcoming 3DS title is set in the "same world but in a different generation".

The Legend of Zelda: A Link Between Worlds is the upcoming sequel to the SNES's A Link to The Past. Except it's not really a sequel. And it isn't a remake either. Nintendo's Zelda franchise boss Eiji Aonuma talked to Kotaku about how the world of A Link to The Past has changed in A Link Between Worlds, and what both newcomers and veterans to the Zelda franchise can expect.

"It's not a direct sequel in the sense that it's the same Link and Zelda," said Aonuma, "the world is the same and it might be a different generation of Link and Zelda." So... it's a remake then? "They're similar," Aonuma said, "but not identical. This isn't a remake." Aonuma elaborates: "It's the same world, It's the same space. But in the same way that, over time, the topography can change, there will be some changes. The land will be affected a little bit."

Using the example of the game's dungeons, Aonuma said their locations may be the same in both A Link to The Past and A Link Between Worlds, but the interior will be completely different. "Now that I say that out loud, it sounds a little strange," Aonuma admits, but assures us that his team is "making decisions based on what's best for gameplay. We're picking and choosing what we change and what we don't, so players can expect some changes."

"We've added a dimension," Aonuma said, referring to Link's new ability to become a 2D drawing. He noted that it could take a familiar location and let "players see it in a whole new light."

Aonuma previously said that the game will "shock" fans with a big surprise right at the start of the game. He also said the game will run at 60FPS while in 3D and feature both the Light and Dark worlds from A Link to The Past.

Related to:
steven bogos, 3ds, a link between worlds, a link to the past, nintendo, rpg, the legend of zelda
0
Tweet