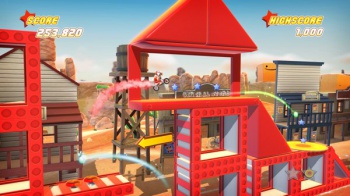 Joe Danger and its sequel, Joe Danger 2: The Movie, will make their Steam debut later this month.

Come Monday, June 24, you'll be able to download PC iterations of Joe Danger and its sequel Joe Danger 2: The Movie directly from Valve's ubiquitous digital distribution platform, Steam. That would be great news by itself, as the two games are intensely addictive and offer an almost non-existent learning curve, making them perfect for anyone, but developer Hello Games isn't content to merely port the titles. Instead, the company has added a host of new features. To wit:

So there's new content, including new levels. Joe Danger has never looked so good because we've added lots of graphic quality and resolution settings. It supports gamepad, and now mouse and keyboard, too. Full Steam Big Picture Mode means you can play it at 1080p with 16xAA on your TV (this looks soooo nice). And we've added ghost recording to both Joe Danger and Joe Danger 2 and integrated it with Steam, so you can compete with people right in the game.

But I think the big thing for any PC game is editing and modding. Joe Danger has always had a level editor, but now it's really fully featured. It's got mouse support and all the secret controls we made both games with. It's also integrated with Steam Workshop, so you can really easily browse levels and click to see them pop up in your game.

Great news, right? If nothing else that mouse support should come in handy when creating your own levels. The editor worked well enough on consoles, but it's hard to argue with the precision of a mouse and keyboard for fine-tuning objects in a game like this. Plus, Steam Workshop support should ensure that the games have a nigh-endless supply of user-generated levels for you to play through once you've completed their extant stages.

There's currently no set price for either of these games, but since Joe Danger 2 is currently priced at the equivalent of $15 on the Xbox Live Marketplace, we'd expect the PC game to either match this price point or come in at just a bit less. We'll bring you more details when/if they emerge.