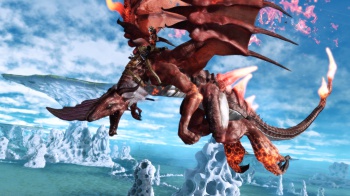 If the upcoming shooter Crimson Dragon proves a hit, it may receive a sequel in the form of an epic roleplaying title.

There's a very good reason why many people who have witnessed Crimson Dragon in action liken it to Sega's classic Panzer Dragoon. Both games are rail shooters, both see players flying through the skies on the backs of fantastical dragons, and both come from the mind of developer Yukio Futatsugi. If Crimson Dragon proves a hit on the Xbox One, the two games may have one more element in common: A sequel that ditches the shooter combat in favor of traditional roleplaying game tropes.

That's according to Joystiq, who spoke to Futatsugi at the recent E3 conference. He claims that while Crimson Dragon is certainly an action title, the basic world structure devised for the title could very easily be shifted to fit a roleplaying game. This seems to be Futatsugi's modus operandi, as his previous most notable creation, Panzer Dragoon, spawned three sequels, Panzer Dragoon Zwei and Panzer Dragoon Orta were both rail shooters like their predecessor, but the Sega Saturn exclusive Panzer Dragoon Saga was a roleplaying game in the vein of the then-wildly-popular Final Fantasy series.

Unfortunately, Sega has decided that rereleasing Panzer Dragoon Saga just isn't worth the effort, and it remains one of the more rare, expensive videogames in existence. With that in mind, we're really hoping Crimson Dragon is a hit, if only because we need more of Futatsugi's roleplaying game efforts. Panzer Dragoon Saga was a fantastic title, held back because so few people had a chance to play the thing. Hopefully Crimson Dragon Saga won't meet the same fate.

Jimquisition: Fee-to-Pay and the Death of Dignity Jimothy Sterling 143 Comments

Gallery of the Day: 8 Xbox One Exclusives That Will Keep You Busy DrStrangelove 18 Comments
Comments on