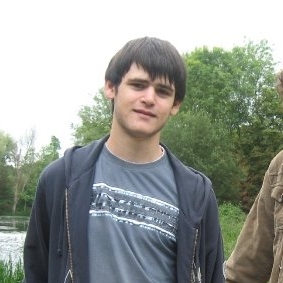 Talent is something that we often look for when picking people for the Community Spotlight. Today, you will meet a member of The Escapist who might not be terribly well known, but contributes thoughtfully to the conversations he joins and has a very busy life off the internet.

Trivun, which is also his real name, is an Escapist member residing out of Wednesbury, England. He works as a surveyor but aspires to be a feature filmmaker and is very partial to experimental films. He spends his free time learning Japanese, playing video games, and conversing with you lovely folks right here on The Escapist. You can check out some of his work here, on his YouTube channel.
You may know him because of the opinions he has presented to you in threads. Today, Trivun will tell you a little about himself.

I've noticed you almost always get the same answer to this every time and mine is no exception, Zero Punctuation brought me here. Specifically, a friend from my old school ( Sorceror Nobody on here) who never uses the site any more got me onto ZP , but I lurked for a while before I joined at university. Truth be told I hardly watch ZP anymore, but the rest of the site has kept me here :D

What is your favorite current Escapist feature?

That's a slightly tough question, since my previous favorite things ( Doraleous and Rebecca Mayes ) are both long gone. However, I'd say Miracle of Sound is a more than worthy continuation of that sort of video. Truth be told, right now I'd say aside from the forums, the quizzes would be my favorite feature here.

You're an amateur filmmaker. When did you decide to do this?

When I was in my final year of school I tried to write a screenplay, that ultimately sucked and was actually a sort of rip-off from I Know What You Did Last Summer (the irony being that I've never even seen that film). However, the filmmaking itch had got me, so when I went to university the next year I joined the film-making society and things just carried on from there.

Is filmmaking what you wish to do for a job, or is it more of a hobby for you?

I'd like it to be my job, but I'm realistic. I started work as a trainee quantity surveyor six months ago and it's decent money and lets me do what I want, which includes making films in my spare time. I'd love to be a professional screenwriter or director, but right now I'm happy to keep it a hobby. Maybe one day...

What is your favorite part of filmmaking? Writing? Editing? The filming itself?

I'm a bit of a control freak when it comes to anything I do creatively, not just film-making, because I tend to care a lot about the projects I work on. As such I enjoy all of it, every aspect, from start to finish. My main talent is probably editing, but that's something I've done a lot more than the other stuff anyway. Just don't let me produce anything; I'll probably leave all the organization to the last minute (happened more than once...) and have to improvise stuff like location and whatever...

In your free time, apart from browsing The Escapist and making films, what do you do with yourself?

I play video games (obviously, I visit this site after all), I read and write short stories, and I've been trying to teach myself Japanese recently. I've mastered one of the three writing styles they use, but not much else. I've started cycling again recently, now that the weather's getting warmer over here.

Again, tough question. My favorite of anything tends to change constantly as I listen to or see new things. However, I've recently been listening a lot to Esben and the Witch , they're a Gothic rock band from the UK who've not long released their second album, "Wash The Sins, Not Only The Face". I'd recommend anyone listening to them starts with "Argyria" or "Hexagons IV." Probably their best songs from their first album.

Ideally, in five years time I'll be at an awards ceremony in London nominated for a BAFTA. Realistically, I'll probably be in either Leeds or London in charge of the financial side of a big construction project, with a quantity surveying Master's degree to my name. One thing I'd love to do by then is to be fluent in Japanese though, another is to finally learn to play the drums.

I'm a big fan of anything experimental, be it in film or otherwise, and I love to have my mind played with. I'm a big fan of David Lynch, and Christopher Nolan, so serious films that don't make sense are the kind of things I like to watch. It's also the sort of film I like to make, because I like screwing with people, and I'd rather make something that won't get a big audience but will still be talked about later, than something that gets loads of viewers yet compromises everything I see as art in cinema. That being said, I'm perfectly happy seeing the big blockbusters. How would I get my Iron Man fix otherwise? (Well, apart from the comics I mean :P)

If you would like to nominate someone for an upcoming Community Spotlight, feel free to let me, Marter, know through a PM or user group! When nominating, please tell us why this user deserves to be in the next Community Spotlight and provide links if possible.