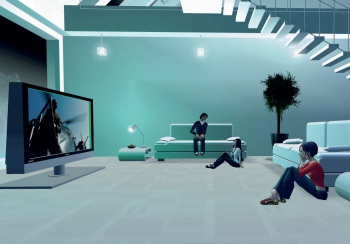 This morning Linden Labs fired off a PR burst commemorating Second Life's decade of existence. Depending on who you talk to, the game is either a living example of William Gibson's prescience or a giant virtual sandbox full of deviants who've been left free to explore their every quirky sexual peccadillo. Whichever stance you take, what can't be denied is that Second Life has had a major impact, and to prove that point Linden Labs also issued an infographic full of handy information about just how big its title has been since it debuted all those years ago.

According to the image, Second Life remains surprisingly popular. The game boasts 38 million user accounts created over its lifespan who have racked up an impressive 217,226 years of total collective playtime in Linden's virtual world. And just what are these users doing in Second Life? Well yes, there's the sexy bits, but according to the infographic, there's also a massive makeshift economy churning away under all those rabbit suits and flying penises. 1.2 million daily transactions are said to take place within Second Life, and over time that has amounted to a staggering $3.2 billion in real world cash that's been transferred between players in one form or another within the MMO. The most popular item for sale? Women's hair styles, because even in a virtual world you want to look your best.

"Second Life is a vibrant shared creative space, filled with the creativity and imaginations of its users," states Linden Labs CEO Rod Humble. "It's impressive for a user-created world to reach ten years of age and more impressive still for it to see a million monthly active users!"

"As we celebrate this anniversary, Second Life has better performance and is easier to use than ever before, and our customers are making the inworld experience richer every day. We're very proud to reach this milestone, and would like to say a big 'thank you!' to all of our friends around the world who have been a part of Second Life's ten-year history and will be a part of its future."

As much as I enjoy taking pot shots at the infamously overt sexuality that's become the hallmark of Second Life over the years, truth is I think the game is brilliant, if only as a large-scale sociological experiment. If people have fun there, that's great, but more interesting is watching what happens when humans are given almost infinite freedom in a virtual simulacra of our own meatspace reality. The fact that so many revert to their most base instincts is really very telling about the modern human condition, and particularly society's puritanical ideas of propriety.

Plus, William Gibson totally called all of this back in the 80s, and that's just rad. Here's hoping Second Life will be around in another 10 years, serving as an eerie, occasionally uncomfortable mirror of humanity's most deep-seated instincts.