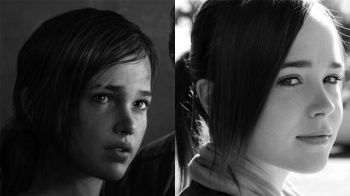 The actress best known for Juno doesn't appreciate that Ellie from The Last Of Us looks and sounds like her.

Ellen Page, an actress best known for her roles in Juno and Inception, by some accounts, looks and sounds remarkably similar to Ellie from Naughty Dog's The Last of Us. It turns out she thinks so too, telling reddit in an AMA, "I guess I should be flattered that they ripped off my likeness, but I am actually acting in a video game called Beyond Two Souls, so it was not appreciated."

Originally, the character bore even more resemblance to Page, but shortly after the actress signed on to voice the character Jodie in David Cage's Beyond Two Souls, Ellie underwent some changes. The new look Ellie that was in in the retail version looks younger with a "slimmer" face.

While it seems obvious that the character changes were made to avoid stepping on any toes, Naughty Dog actually came out in the past and claimed that Ellie's character make-over had "nothing to do" with Page's casting in Beyond Two Souls. It said it was a "complete coincidence" that changes were made to Ellie's appearance and character after people pointed out the similarity between the two.

Page also talks a bit about her work on Beyond in the AMA. "We did do our own motion capture," she said, when asked if she and co-star Willem Dafoe did motion capture for the game, "The suits are not that bad actually...it is sort of nice to not worry about wardrobe."

"Willem is an incredible actor and I loved working with him," she added.

What do you think? Does Ellie look and sound a little bit too much like Ellen Page? Or is it just a big coincidence?