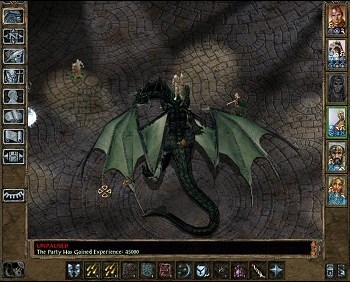 Beamdog remains "interested in the concept" of Baldur's Gate 3 but the odds of it actually happening are starting to look pretty slim.

One of the most exciting things about Beamdog's remakes of the Baldur's Gate games is the possibility they raise of Baldur's Gate 3, an all-new game in one of the most storied fantasy-RPG franchises of all time. It's a bit of a tricky thing, since Baldur's Gate 2: Throne of Bhaal ended with some serious finality, but it could be done, perhaps with a bit of a Planescape-y twist, and more importantly, there was a hint of a hope that it might actually happen.

"The prognosis [for resuming work on Baldur's Gate] is mixed," he said. "Best case, we can sort this out soon. Worst case, this could be in legal hell for a while. I like making games, but this contractual dispute bullshit keeps me up at night."

"Baldur's Gate 2: Enhanced Edition is on indefinite hold, as is the current patch," he continued. "Baldur's Gate 3, we are still interested in the concept, but currently I'd say we're very demoralized."

The Baldur's Gate: Enhanced Edition website says Beamdog doesn't know when the game will be available again but insists that the studio will figure out some way to bring it back.

UPDATE: Some of you have noticed that the PC version of Baldur's Gate: Enhanced Edition is still available on Steam. According to a Beamdog rep, the Steam version of the game is managed by Atari and it's therefore up to it to have the game taken down. "Why they haven't done so yet, I'm not sure," the rep said.

On the assumption that the Steam version will at some point be pulled as well, if you have any interest in it, you might want to get a move on.