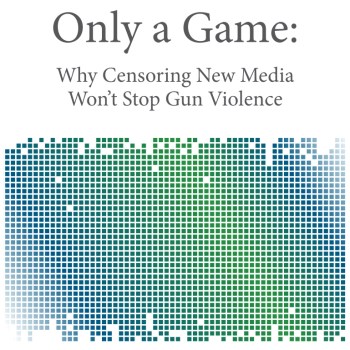 A report entitled "Only a Game: Why Censoring New Media Won't Stop Gun Violence" claims that research showing a link between videogames and real-world violence is seriously and fundamentally flawed.

There are studies that claim to prove beyond any doubt that videogames can cause violent behavior in young and/or impressionable people, and studies that claim with absolutely certainty that no such link exists. A new addition to that milieu, "Only a Game: Why Censoring New Media Won't Stop Gun Violence," acknowledges that videogame content can be "ugly, frightening or even immoral," but argues that research claiming a connection between videogames and violent behavior in the real world are "highly controvertible," and that where such links have been found, "they are negligible and short-lived."

Three "key findings" of the study, as listed on the Media Coalition website, are that while videogame consumption has gone up, violent crimes rates have gone down in the U.S. and other nations; that studies of research showing a link between gaming and violence, carried out in the U.S., Australia, the U.K. and Sweden, have found them to be "flawed, flimsy and inconclusive"; and that the videogame industry's self-regulation has repeatedly proven an effective system that accommodates the First Amendment protections recently extended to videogames by the Supreme Court of the United States.

"Media Coalition takes no position on the content of videogames (or other media). Some people may be fanatic players; others may detest them. Some may find them appropriate for their children, others not. A majority of Americans may believe that fictional violence leads to violence in real life. But common sense and objective research does not show it," the report concludes. "What we do know is that judgments about 'good' and 'bad' violence are matters of taste and individual morality. And as the majority in Brown wrote, under our Constitution 'esthetic and moral judgments about art and literature . . . are for the individual to make, not for the Government to decree, even with the mandate or approval of a majority'."

The "Only a Game" report is available in full from the Media Coalition.