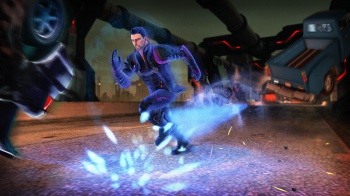 The game was still refused despite the recent introduction of an R18+ rating in Australia.

The Australian classification board has rejected upcoming President-based sandbox game Saints Row IV for rating. This happens despite the recent introduction of an R18+ rating in Australia, meaning that Saints Row IV will be the first game ever to be refused the new rating in the country. Publisher Deep Silver now has a chance to alter the game's content and resubmit it to the board. If it chooses not to, the game will effectively be banned from sale once it is released.

The board's report of the game noted that it "includes interactive, visual depictions of implied sexual violence which are not justified by context" as well as "elements of illicit or proscribed drug use related to incentives or rewards". The board noted that such depictions are prohibited by the computer games guidelines set forth when the R18+ rating was finally passed.

Since the ratings inception, 17 games have been classified under the new R18+ rating. Previously, MA15+ was the highest rating in Australia, and developers often had to heavily censor content to see release in the country. Volition and Deep Silver have yet to issue a comment, but it can probably be assumed that it will be resubmitting a censored version of the game.

Source: Australian Classification Board via Games.on.net

Update: Deep Silver has provided the following statement regarding the classification refusal:

"Deep Silver can confirm that Saints Row IV was denied an age classification in Australia. Volition, the developer, are reworking some of the code to create a version of the game for this territory by removing the content which could cause offence without reducing the outlandish gameplay that Saints Row fans know and love. Saints Row IV has been awarded PEGI 18 and ESRB M ratings where fans can enjoy their time in Steelport as originally intended."