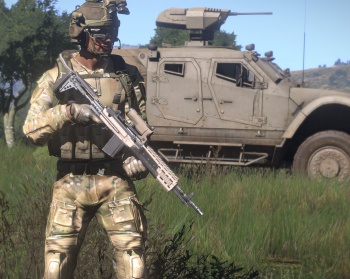 If the ArmA series is known for anything, it's for spawning the hyper-popular DayZ modification. If it's known for two things however, that second thing is almost definitely its meticulous attention to detail. Each game in the series has inched closer and closer to fully simulating the realities of modern war, and ArmA III should be the best incarnation of that idea to date.

Of course, you don't have to take our word for it. Now that the title is in beta, you can simply play the thing. According to Bohemia Interactive, anyone who pre-orders ArmA III via Steam will automatically gain access to the beta test. If you were fortunate enough to be an alpha tester for ArmA III, you're already invited to the beta and merely need update your game client to the latest version.

"The Beta is a big opportunity for us to involve more players in Arma 3's development and is the next step along the road towards our full release," says creative director Jay Crowe. "With a variety of new singleplayer and multiplayer scenarios and a whole bunch of new sandbox content, we're looking forward to introducing players to what true combined arms combat really means in Arma 3."

If you'd like to learn more about "what true combined arms combat really means," then please pay a visit to the game's Steam page and pre-order the title as necessary. Alternately, if you just want more info on the game, visit its official page.