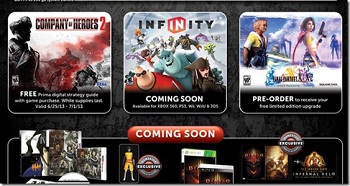 A GameStop ad points to limited edition versions of the HD remasters.

Final Fantasy fans everywhere rejoiced to hear that Square Enix would be dusting off Final Fantasy X and X-2 for an HD collection that will be sure to enthrall fans of girl power and poorly acted laughter everywhere. If that weren't enough to tantalize potential players, Square Enix may have one final trick up its sleeve to draw fans of the series into purchasing the new remastered versions. While there is presently no confirmation from Square Enix, an ad from GameStop has pointed to a potential limited edition of the Final Fantasy X/X-2 HD Remaster.

Either way, it leaves us to wonder what Square Enix could include in a limited version of the HD Remaster. Considering the size and scope of both Final Fantasy X and X-2, something like a strategy guide could come in handy. Alternatively, a soundtrack CD would be a nifty treat for fans of Nobuo Uematsu's, whose work includes some rather lovely tracks from Final Fantasy X. What would you like to see if a limited edition does in fact surface?