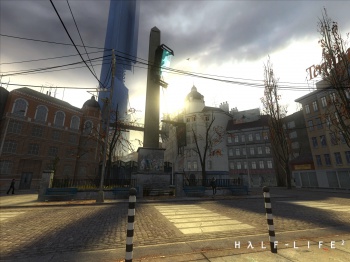 An update from Valve seems to have mistakenly changed City 17's official language.

If you launched Half-Life 2 earlier today, you may have been surprised to hear every NPC delivering their lines in Korean instead of your language of choice. Luckily Gordon Freeman is fluent in Korean (presumably), but many gamers were left wondering what the deal was. Naturally, this being Valve, theories started flying immediately. Valve updated the original Portal with clues just prior to the announcement of Portal 2, so fans were bouncing of the walls in hopes that this was the start of some new ARG leading up to the announcement of the mythical Half-Life 3. The theories were given some weight when Steam Support tweeted this cryptic message:

The Korean text translates to "Prepare for unforeseen consequences," a reference to a chapter in the first Half-Life. Don't start learning Korean to find clues, though; the bug has been fixed and NPCs should now speak the right language. A Valve employee stepped into the comments section of the latest patch notes, apologizing for the mistake and shooting down the theories: "No ARG sorry, just me mucking up."

Naturally some fans are denying the simple explanation and assuming that this is an elaborate hint towards a reveal during the Steam Summer Sale. Disavowal from the Valve team is pretty strong evidence to the contrary, but then again, that's just what they'd want us to think.