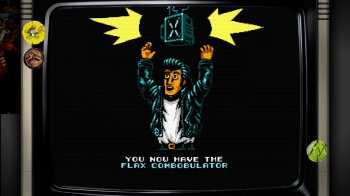 Retro City Rampage gets even better with a new patch that adds support for user-created modifications as well as a new "Retro+" graphics mode.

By now you really should have played Retro City Rampage. The game is a small (like, 30MB small), unassuming homage to everything we children of the 1980s hold so worryingly dear, but underneath that superficial exterior lies a really addictive, top-down Grand Theft Auto satire combined with surprisingly intuitive gameplay and controls.

However, there must be some people out there who look at the game's retro-styled, 8-bit graphics and sneer, thinking that in 2013 all games should have bump-mapped whatever and shiny bits all over the place. For those horribly incorrect few, developer Vblank Entertainment has issued an update for the game that adds a new "Retro+" graphics mode to the game. Retro City Rampge's original aesthetic is still perfectly intact, but the patch adds optional effects like dynamic soft shadows and improved colors to bring the game's graphics a small step closer to what we expect from modern titles.

Further, the patch also adds hooks into the game's codebase that should make crafting your own Retro City Rampage mods much easier. This is also backed by official mod support from the game's developers, so if you have a brilliant idea of where to take the 8-bit homage, now would be a good time to start plotting a world map or scribbling down blocky character designs.

Of course, that mod support is more or less entirely exclusive to the game's PC incarnation. Likewise, while Retro City Rampage also has Wii, Xbox 360, PlayStation 3 and Vita incarnations, the patch is currently only available for PC players. C'est la vie. We expect the update to appear on other platforms soon.