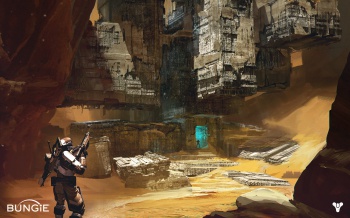 How does the Xbox One render such attractive videogames? The secret, it seems, is something called "tiled resources."

While we won't bore you with all of the technical details, the idea behind tiled resources is pretty simple. Basically, a bit of code instructs your gaming console to render more detail in areas that your character is focusing on, while shedding detail in areas of the game that you can't immediately see. If it helps you to imagine things, think about how your eye works. You can see very clearly directly in front of you, but things in your peripheral vision are blurred and slightly unrecognizable, at least until you avert your gaze and suddenly items that were previously blurry take on all sorts of neat details. Tiled resources reportedly simulates this within a virtual world, freeing up resources for the system to use on other tasks.

"The motivation for doing something like this is to enable you to make games with unprecedented amounts of detail," said Antoine Leblond, vice president of Microsoft's Windows division, at today's Build conference.

This idea, while not completely novel - Mipmapping is a graphics trick that relies on the same principles - is so promising that not only has Microsoft included it in the Xbox One, but it's also a highly-touted feature of the Windows 8.1 operating system.

Of course, none of this fancy technology means a thing if developers don't take advantage of it, but since the Xbox One has yet to make its retail debut those games makers have plenty of time to figure out the console's technological feature set. More crucially, we should be praying that they can build fun, entertaining games, but that's all subjective so instead let's focus on tangibles, like this "tiled resources" concept.

Do any of you suddenly want to pre-order an Xbox One based on this information? Seriously, I'm not being flippant here. How exciting is this news for you?