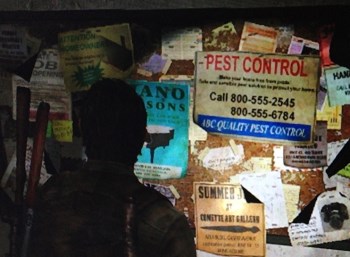 Creative Director Neil Druckmann says the inclusion of real phone sex numbers in The Last Of Us was "an honest mistake."

Look closely at the right bulletin boards in The Last Of Us and you'll notice among the posts an ad for "ABC Quality Pest Control," with two separate 800 numbers you can call to "make your home free from pests." But if you do happen to call them, which some people obviously did, what you'll actually end up connected to is a phone sex line.

"That was an artist's mistake," Druckmann told Kotaku. "What happened was, they put some phone numbers in the game and then they thought they could just change the area code to 555, then it's invalid because it's what they do in movies. But I guess that doesn't work when you have a 1-800 in front of it."

Druckmann said Naughty Dog will remove the sexy hotlines, although I'm not really clear on why it should. The Last Of Us is what I call a very M-rated game, with "blood and gore, intense violence, sexual themes and strong language" all on the ESRB content descriptor menu, and television advertisements depict (or at least strongly suggest) Joel, the hero, offing an injured guy with a rusty machete. In light of all that, is the presence of a phone sex number really that much of an issue?