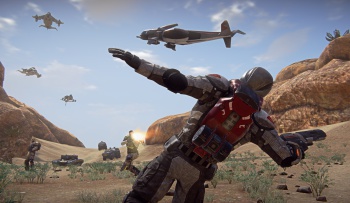 In a stroke of development genius, Sony Online Entertainment is offering players the chance to expand the content in Planetside 2.

Massively multiplayer online games live and die based on their wealth of content. MMO players are a rabid bunch that will tear through a game as quickly as its developers can add new elements, so those companies who enter the MMO space need to be prepared to update and improve their games at a constant rate. Alternately, you could take the same tack as Sony Online Entertainment and simply give players the tools to build their own content.

At some as-yet-unspecified point in the month of August, an update will be released for Planetside 2 that allows players who meet certain in-game requirements to generate missions for their fellow gamers. According to the game's developers, these missions will be available only at certain points in the title's virtual world, and on completion these tasks will award extra experience compared to the standard, Sony-crafted missions that debuted alongside Planetside 2.

What kinds of missions will be available? Sony covers that in a recent blog post:

That quote makes a lot more sense if you're a Planetside 2 player, but the key takeaway here is that, while rudimentary, the user-generated missions system about to be introduced to the game should offer a variety of goals for players to throw at one another.