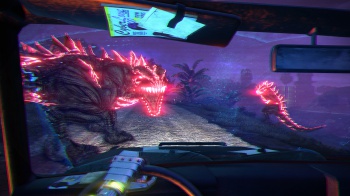 Remember Far Cry 3: Blood Dragon? Of course you do. It won the heart of the internet with its over-the-top neon-soaked 80s action, making us all think fondly back on the days when Bruce Willis and Arnold Schwarzenegger were kicking ass and taking names (they still do so today, but only when the retirement home lets them out). You can probably expect more Blood Dragon in the future, as Ubisoft CEO Yves Guillemot has reported that the game sold over 500,000 copies, and has exceeded Ubisoft's expectations.

Guillemot said he was "very happy" with the game's performance, adding that it has given them the opportunity to further explore that formula of downloadable brand extensions in the future. The $15 stand-alone DLC also succeeded in spiking sales of the full Far Cry 3 release, especially on PC.

Blood Dragon was met with fairly favorable reviews, with critics praising the developers taking the familiar Far Cry 3 assets and doing something completely outlandish with them. Lead voice actor Michael Biehn previously hinted that a sequel may already be in the works.

It's easy to say this when you're boasting half a million sales, but I wonder if he would feel the same way if Blood Dragon was a flop? You can purchase Blood Dragon on Steam, or on the PS3 and Xbox 360's respective digital stores for $15.