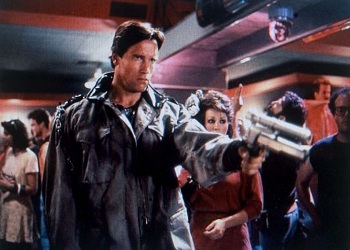 Arnold Schwarzenegger will "be back" as everyone's favorite cyborg assassin in a new series of films.

Fans of the Terminator movies are in for some news. The franchise, which arguably hit a low point with the somewhat mediocre Terminator: Salvation, will be getting a full-fledged reboot that should release in June 2015. The reboot which has apparently been in the works for some time now is being handled by a slew of Hollywood veterans, including Laeta Kalorgridis(Avatar, Shutter Island) and Patrick Lussier (Drive Angry), who are currently on deck to work on the screenplay. It will also be produced, in part, by David Ellison whose recent work includes World War Z, Star Trek: Into Darkness, G.I. Retaliation and Mission: Impossible- Ghost Protocol.

Perhaps the biggest bit of news to come from this, however, is that Arnold Schwarzenegger will be returning as the titular Terminator. While that might seem a bit odd to some considering that Schwarzenegger will be closing in on age seventy by the time the movie releases, it's not all that surprising. Schwarzenegger had previously confirmed he would be returning for Terminator 5. That in mind it makes sense that he'd stick with the franchise now that the sequel's becoming a reboot. Granted, he's probably not going to be as scary as he was in 1984, but you never know. If he can pull off a new Conan film after thirty years, maybe he can still be a murderous robot too.

All of this, of course, preface's the question of "do we need a new Terminator franchise?" Personally, the fan in me just wishes they'd stopped in 1991 when Terminator 2: Judgement Day left things arguably perfect. That said, if they're going to do anything, a reboot would probably be better than more sequels.

The Big Picture: The Boot, Part One MovieBob 100 Comments