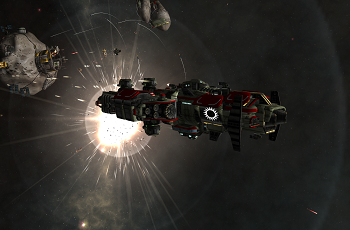 Paul Zakrzewski's Void Destroyer recently had the fortune to reach its $20,000 Kickstarter goal. Better yet, its success has continued on and with less than three days to go it stands a few hundred dollars shy of having raised $30,000. The cause of some of the fundraiser's success may not be hard to pin down. Void Destroyer is more than a bit reminiscent of the 1999 strategy classic Homeworld, which saw two sequels before virtually disappearing in 2003. Despite its absence, fans of the series have remained enthusiastic over the years, something that likely helped Void Destroyer to find some of its support.

"Homeworld has been a huge influence," said Zakrzewski, speaking with The Escapist. According to Zakrzewski, much of Void Destroyer's interface and tactical mechanics were drawn from the RTS classic. That being the case he's worked hard to establish his game as something original. "I don't believe that re-creating something is a winning strategy. I have to give players something new, something unique, otherwise what's the point? It would just be a cheaper version of what a bigger studio can do." Striving toward the goal of staying unique, Zakrzewski included an option for players to take control of individual ships and pilot them in place of the AI. Void Destroyer, in turn, can be played as something of a hybrid of strategy and space flight sims. In the future he also plans to add first person shooter elements to further diversify the game's experience.

Zakrzewski's hope in the merging of these divergent genres is to create an experience that will someday stand as a classic in its own right. "My plan and goal is to create the greatest space sim of all time," he said. "I want to create a game of my dreams that gives the player many different ways of playing and interacting with the game world. My plan is to work on this game until I have exhausted my own possibilities and potential." If the success of Void Destroyer's Kickstarter is any indicator, there is an audience ready and waiting to see how far Void Destroyer's potential will take them.