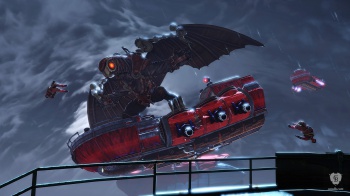 Details on the first DLC in the BioShock Infinite season pass should arrive later this month.

Back when BioShock Infinite launched in March, players could pre-order a "season pass," which promised three add-on packs that expand on the game with new stories, characters, abilities and weapons. It's now been over three months since the game's launch, and we haven't heard any word on when the DLC will hit. Developer Irrational Games promised IGN that information on the DLC will drop later this month.

Irrational top dog Ken Levine said the studio has been working on the new content "since the game shipped." Levine said "things are going well," but asked fans to understand that "game development takes time." Originally announced in August of 2010, there was a years-long stretch where little was heard about BioShock Infinite and its development. Since then, delays have pushed back the game's release date on several occasions, a problem that now seems to be plaguing the game's planned DLC packs.

After playing the masterpiece that was BioShock Infinite, I'm OK with Levine taking as much time as he wants, though more eager fans may be getting a little agitated, especially considering a "DLC pack" announced for the game earlier this month just turned out to be a collection of pre-order bonuses, that isn't even a part of the season pass.

BioShock Infinite's season pass sells for $19.99 on Steam and the PlayStation Store, and 1600 MS points on Xbox Live. Gamers who pre-order the season pass will gain access to the Early Bird Special Pack, a collection of upgrades, weapon skins and items that players can use in the game. It offers a 30% discount over buying the three DLC packs separately.