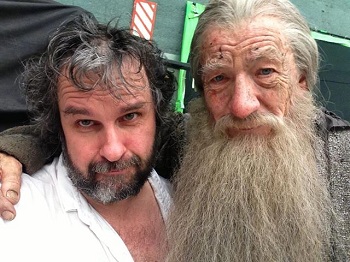 Director Peter Jackson has confirmed that the actor's turn as the classic character has come to an end.

There were a lot of reasons to love The Lord of the Rings films. The scenery of New Zealand was gorgeous, the score was epic and, of course, it was just nice to see the generally accepted progenitor of the fantasy genre competently adapted to film. For our money though, one of the elements that kept us returning to the cinema to watch the trilogy over and over again on the big screen was Ian McKellen as Gandalf. Sure, the rest of the cast was good; Sean Bean was great as Boromir and Andy Serkis owned the part of Gollum. That said, McKellen's performance as the wizard to end all wizards was so wholly excellent that it had us screaming "You shall not pass" at every semi-imposing creature we could find.

It has now been revealed however, that the days of McKellen donning the robes of a wizard may finally have come to an end. Peter Jackson, the director behind The Lord of the Rings and the ongoing Hobbit trilogy, confirmed that all shooting involving the veteran actor had officially wrapped up. "Seconds ago we finished our last shot with Gandalf" said Jackson. "The end of an incredible adventure that began in 1999. I'm feeling very sad right now." Fantasy fans everywhere will likely concur. Even if The Hobbit: An Unexpected Journey had some quibbling problems holding it back from the same greatness achieved by The Lord of the Rings, it was still a joy to see McKellen return as Gandalf. Knowing that he'll truly never never take up his wizard's staff again is definitely a bit of a downer. On the plus side, at least we still get to see him play an angry mutant one more time.

Related to:
stew shearer, an unexpected journey, gandalf, ian mckellan, peter jackson, the desolation of smaug, the hobbit, the lord of the rings, there and back again
0
Tweet