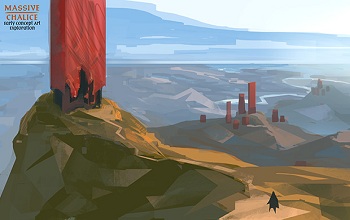 Co-creator Brad Muir thinks players would "enjoy" permadeath if they "gave it a chance."

One of the established tenets of most videogames is that death isn't permanent. If Mario falls down a hole or Sonic drowns in purple water, you can count on them having extra lives so you can try again. There are some games, however, that buck the trend and make death permanent. Rush into a room full of terrorists in Rainbow Six and you can kiss that soldier goodbye. Take that Pegasus Knight too close to an archer in Fire Emblem and you'll be forced to watch as they're turned into a bloody, winged pin cushion.

Often, in these games and others, your only recourse for saving a downed unit is to start the whole level over and try again. Brad Muir is intent on taking that option away. The man at the helm of Double Fine's Massive Chalice, which recently ended its successful Kickstarter campaign, he hopes to implement permanent death in deep new ways. "I think that people are really missing out on a cool "monkey wrench" when they avoid permadeath," said Muir. "Monkey wrenches force the player to think on their feet. The player crafts a plan within the system and then the plan is put to the test. If you know the system very well, without randomized events happening you would probably win every time."

According to Muir, the loss of a valued character can represent exactly that kind of unexpected event. In turn, Massive Chalice will integrate loss on a fundamental level. While death in battle is always a possibility, the in-game passage of time will also inevitably force heroes the player may count on to age, grow old and die. "Losing a key character that you relied on creates amazing gameplay where you really have to approach the game in a different way. The player has to experiment with new strategies and think about the entire system in new ways." While there is perhaps a chance that forced permadeath could turn off the sort of gamers that never like to lose a unit, Muir is confident Massive Chalice can win players over. "I think that a lot of the players that go to great lengths to avoid permadeath would actually enjoy it if they gave it a chance! I hope that with Massive Chalice we can make the permadeath feel tough but fair."