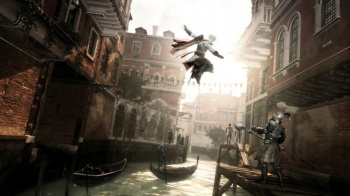 The next game to join the Xbox Live Games With Gold program will be Assassin's Creed II.

When Microsoft unveiled its Games With Gold scheme at the recent E3 conference, two games were specifically mentioned as examples of titles that would be available, free of charge, for download to anyone with an Xbox Live Gold subscription: Halo 3 and Assassin's Creed II. This revelation excited people, but then the program debuted and to date the only free titles we've seen have been Fable III and the recently added Defense Grid: The Awakening.

This has upset some Xbox Live Gold subscribers who were hoping to play the games Microsoft promised us at some point in the near future. While we still don't know when Halo 3 might appear, we do now have a release date for the gratis version of Assassin's Creed II. That title will hit Games With Gold on July 16.

As with all Games With Gold titles, Assassin's Creed II will only be free for a limited time. Specifically, the game will be replaced with a new title on August 1. Those who download the game prior to that date will be able to play it for free as long as they don't delete the game from their hard drives (though if that does happen, it should remain in your Xbox Live download history at its $0 price point).

Feel any better now? Is Games With Gold finally starting to live up to its promise? Are you suddenly tempted to shell out the cash for an Xbox Live Gold subscription? Or has this whole thing been a colossal disaster? Comments below.